An olive workshop dating back to the sixth century was unearthed during excavations in the ancient city of Dara, located in the southeastern province of Mardin. This new finding revealed that the historical site was an important olive production and trade center. 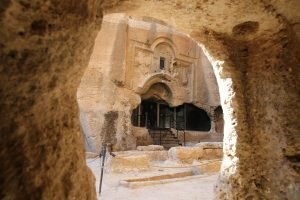 Excavations continue in the 5,000-year-old ancient city, situated 30 kilometers (19 miles) from the city center, with the support of the General Directorate of Cultural Heritage and Museums, the Turkish Historical Society, Dicle Development Agency, Mardin Governorship and Mardin Metropolitan Municipality under the direction of associate professor Hüseyin Metin of Kafkas University’s archeology department. During the recent digs, archaeologists found an olive workshop used in the city in ancient times.

Metin, the head of the excavations, said that they have revealed very important findings regarding the civil architectural structures in Dara with the studies they have conducted to date. One of these architectural structures is the olive oil workshop. “The olive oil workshop is one of the industries that had a very important place in ancient times,” Metin added.

Emphasizing that olive and olive oil were produced more in ancient times, Metin continued: “We think that the workshop was built because there were more wetlands here at these times and olives and olive oil had a great commercial return in that period. Oil was food and was also used as a lighting tool in ancient times. From here, we can deduce that olives in this workshop did not only meet the needs of the city but were also used commercially. Therefore, Dara was a place of olive production and trade. I believe that we will provide more detailed information about the extent of this trade with the excavations we carry out in the coming period.”

According to Metin, the only object unearthed in the workshop is a cylindrical olive crushing stone. “This is the first find for us in terms of olive oil production in Dara but we will probably reveal more traces.”

He informed that olives used to be brought here and then transferred in sacks to the crushing section where they were crushed with the big stone that they have unearthed. This process is similar to today’s mass production, according to Metin.

Noting that there are cracks in some parts of the stone, Metin continued: “After repairing them, we will now have one more material providing information about daily life in Dara. We will present them to visitors with promotional signs the next year.”

The ruins of the ancient city of Dara, featuring ancient rock tombs dating back to the fifth century A.D., are hailed as the “Ephesus of Mesopotamia.” Dara was an important settlement along the famed Silk Road. The Roman-era ancient city also boasts a popular Necropolis  where religious ceremonies were held and hundreds of people were laid to rest.

The archaic city of Dara, located in southeastern Mardin province, was one of the significant trade centers of Mesopotamia in ancient times. The Roman-era city offers opportunities for visitors who want to embark on a historical journey with its all glory and splendor.

Excavations and research have been carried out for 34 years in Dara’s Oğuz village, which is some 30 kilometers (19 miles) from the provincial center.

The ruins of the ancient city of Dara, featuring ancient rock tombs dating back to the fifth century A.D., have been compared to the famed city of Ephesus in Aegean Turkey, earning it the nickname the Ephesus of Mesopotamia, the breadbasket of the ancient Near East.

The city, an important settlement along the famed Silk Road – which also saw great wars – for years served as the last stronghold of the Byzantine Empire in southeastern Anatolia, offering unique opportunities for those who want to go on a historical journey.

The necropolis, which literally means the city of the dead, is where religious ceremonies were held during the Roman Era and hundreds of people were buried together. Now, it is one of the most popular spots in the ancient city. “Our purpose here is to fully reveal the tourism potential of Dara, one of the most important city walls in the world,” said the Minister of Industry and Technology Mustafa Varank upon visiting the ancient ruins.

In this context, the government provided support of 4 million Turkish liras (nearly half a million dollars) through the Attraction Centers Support Program, as carried out by the Mardin Museum Directorate.

“Each region in Turkey has different richnesses within itself. Some of our regions are distinguished by their industry, some by their agricultural capacity, and others by their tourism,” he added.

It is necessary to develop policies compatible with regional scale and geographies, he said, adding that Mesopotamia stands before us as a great success story.

The ancient city, founded by the Eastern Roman Empire in order to protect their border against the Sasanian Empire, is a favorite spot for tourists to take photos or newlyweds to pose for wedding or honeymoon pictures amid historical splendor.

The archaeological excavations began in the ancient city in 1986, but only some 10% of the area of an ancient village has been unearthed so far.

Over a period of 25 years, archaeological digs slowly revealed a monumental mass graveyard or necropolis.

One such cistern is located some 25 meters (82 feet) under a village house in Dara, which has drawn comparisons to Istanbul’s famed Yerebatan Cistern. The cistern, which the villagers call the “dungeon,” was cleaned and unearthed over painstaking work spanning some 15 years.